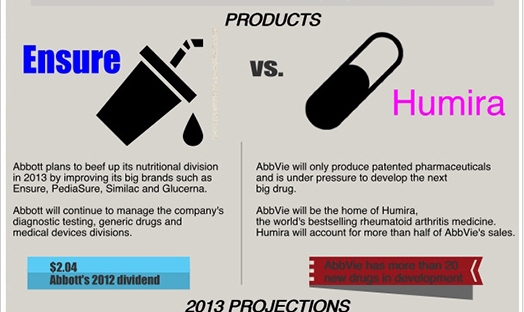 Nov 29, 2012 For the past year, top executives at Abbott Laboratories have been trying to convince investors that the impending spinoff of the North Chicago medical-product giantʼs pharmaceutical division, set for January 1, will make the 125-year-old company a more valuable stock holding. At the same time,

executives also predict that the new spinoff pharmaceutical company, to be called AbbVie, will perform better as a stand-alone investment.
When it first announced the spinoff plan in late 2011, Abbott said the move makes sense because its two business segments “have evolved into distinct investment and business opportunities.” Part of the strategy may reflect the sagging valuation that Wall Street now gives the shares of once-highflying drug makers.
“Over the last 12 months, we prepared both Abbott and AbbVie to be successful independent companies come January 1,” CEO Miles D. White said during a third-quarter conference call with analysts.
Because investors will own shares in both companies after the split, analysts are weighing how the stocks of the pharmaceutical-only AbbVie and nutrition-oriented Abbott will perform, once separated.
AbbVie, which will focus solely on patented drugs, will face challenges from inception. The entire pharmaceutical industry has been struggling against a wave of patent expirations on some of the most profitable drugs in the history of medicine. But that generation of blockbusters is aging. This year, Abbottʼs pharmacy group watched the patent for its cholesterol drug Tricor expire. Next year, AbbVie will see cholesterol drug Niaspanʼs patent expire in September. And AbbVieʼs key profit driver, the lucrative rheumatoid arthritis drug Humira, which accounted for almost $8 billion, or 20 percent of Abbottʼs sales last year, will lose its patent protection in 2016.
Morningstar analyst Josh Peters points out that the majority of the spinoffʼs success hinges on Humira. “The problem with AbbVie is that half of its revenue and probably more than half of its operating profits are going to come from a single drug called Humira,” Peters said in an online report.
Opinions vary on how much impact Humira’s patent expiration will actually have.
“We do not think Humira is experiencing a slowdown,” says David Toung, senior analyst at Argus Research, who explained that generic versions of the genetically engineered drug would have similar, but not the same formulation and would have to go through their own clinical trials to establish safety. That could take years, the analyst said, adding that “Abbott is also working to obtain approval for new indications of Humira, which would expand its addressable markets.”
AbbVie, along with many rival pharmaceutical companies, is bracing for the “patent cliff” in 2016, when many of the most profitable drugs will be available for generic production, which will sell at lower prices. The company has the extra burden of coming up with a new blockbuster drug to carry it into the future. This year, Abbottʼs pharmaceutical division had more than 20 drugs in later stages of development. AbbVie is expected to generate $18 billion in revenue in its first year, according to analysts.
Abbott, the “legacy company” that will remain after the spinoff, will have its own concerns. After a tumultuous year – which ended with the elimination of 550 jobs and a warning to workers that more cuts are on the way — Abbott saw its post-spin credit rating lowered by Standard & Poorʼs, which noted that it will have “substantially lower cash flow” without the drug business.
The remaining company will be leaning on four divisions, including nutritional products group (maker of Similac and Ensure); diagnostic instruments and tests; generic drugs and and a host of medical devices that range from heart valves to stents and catheters. Analysts estimate the legacy company will pull in $22 billion in revenue after the split.
White, who is remaining with Abbott post-spin, told analysts last month that the company will be expanding its nutrition division, which it expects to become the breadwinner for the company in 2013.
“We continue to drive double-digit growth of our key pediatric and adult nutritionals by refreshing and improving our brands with products like PediaSure Clear, Similac lutein and Ensure Clear and Glucerna Hunger Smart,” White said. “Outside of the U.S., we are investing in the product pipeline and the infrastructure, including state of the art manufacturing facilities” in high-growth markets such as China and India.
Through the first three quarters of 2012, Abbott reported $29 billion in sales, a 2 percent gain over last year.

Excluding special items, including tax credits for separation and restructuring, the company earned 13 percent more than the year ago period at $5.7 billion, or $3.56 per share. Abbott did narrow its guidance for the fourth quarter to $5 to $5.10, from $5.06 to $5.08, pointing to separation costs associated with AbbVie for the focus.
The past year has been one of steady growth for Abbott, though the fourth quarter has shaved down some of Abbottʼs third quarter gains. In the past 52 weeks, stock prices for Abbott have ranged between $53.80 and $72.47. In New York Stock Exchange trading Thursday, Abbott shares closed up 51 cents at $65.08.
In its third quarter earnings call, the company announced that the combined annual dividend would be 56 cents a share for Abbott, and $1.60 a share for AbbVie. That combined payout will exceed Abbottʼs pre-split dividend of $2.04, and may serve as an incentive for current investors to stick around. Analysts are still on the fence as to whether the corporate divorce will make Abbott and AbbVie more attractive to investors. Toung, who has maintained his “hold” rating of Abbott, says the company will continue its growth trend, but has yet to forecast on how AbbVie will do in its first year.
“While the company is increasing research and development spending in order to develop new medications, it is also acquiring assets to bolster its pipeline and expand its international footprint,” Toung said.
Morningstarʼs Peters says that though the companies are offering strong dividends, they would be better off together.
“Even though we still think that Abbott is a little bit undervalued heading into the completion of the split-off, I just don’t see that much appeal from here for the two pieces,” Peters said. “Frankly, I wish it was staying all together.”